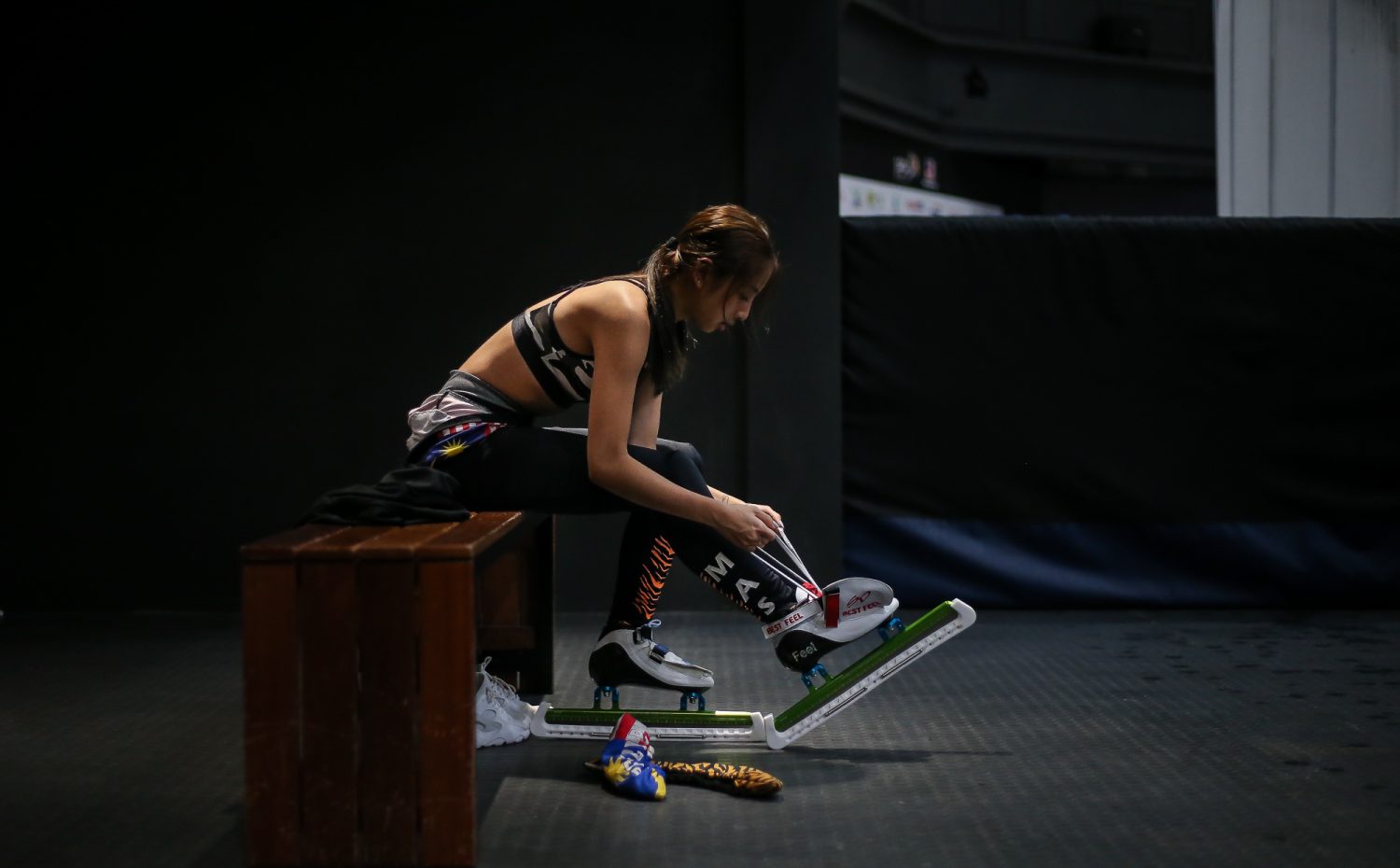 As a figure skater, she dreamt about competing in the Olympics. But it was her work as a photographer that took her there. This is the story of Annice Lyn — photographer, storyteller, and challenger of norms. First, a bittersweet farewell to the ice. Then a triumphant return.

Annice Lyn is the kind of person who makes you feel like you’ve known her forever, right from the get-go.

As our virtual chat session kicked off, she filled us in on her latest project – visually documenting the reopening of schools in Malaysia. Even in a pandemic, she has no shortage of projects to keep her busy. It’s no surprise given the banner year she’s had in 2020, becoming a laureate for Southeast Asia Women of the Future Award and one of Malaysia Prestige’s 40 under 40.

But before she becomes Annice the sports photographer, there was another Annice. A younger girl who spent countless hours in a cold rink to train for local competitions, hoping for a distant chance to compete internationally. Being a figure skater in a country lukewarm to winter sports was an uphill battle. “It’s not an economically friendly sport. It has a shelf life. By a certain age, if you do not reach any level or qualify for international competitions, the path in front of you is obvious.” The moment of truth came after a collision sidelined her with an injury, and she decided to move on. After hanging up her skates, she focused on completing her studies in architecture.

Still, the ice had a way of pulling her back into its orbit.

She was struck by the fact that skaters in her home country still had a tough time obtaining great photos of their performance. It was something she understood on a personal level. During competition days, she recalled forking up RM 60 to have her photos taken. “My mom said: ‘If you want to, use your own pocket money.’ So I saved up. But when the photos came out, they only showed the moment when we took off and landed. I feel cheated,” she says with a laugh. Ready for another training day, a skater laced up her boots

As a former athlete, Annice knew the fleeting minutes when a skater performed represents months and years of hard training, aching muscles and hidden tears. Someone had to capture the moments when this hard work came to fruition—and she decided to rise to the challenge.

As it happened, she already knew her way around a DLSR camera, a skill picked up at university. “Surprisingly, using the Canon EOS 55D I had at the time, and then the Canon EOS 6D, I managed to capture the skaters while they were on the air. Even with a low frame-per-second rate!”

One opportunity led to another, and her career took off. She began working with federations, ice skating associations and national teams. Her coach commissioned her to shoot his skaters. Parents of young skaters came knocking. She was hired to photograph competitions, from Nationals to the SEA Games and ultimately the biggest ticket of all – the XXIII Olympic Winter Games in Pyeongchang.

How does it feel to cover an event of such magnitude? “When I was a figure skater, I always dreamt of competing in the Olympics, even though I knew there was no chance. I can’t believe I was there, not as an athlete but as a photographer, doing something that I love.” This moment is even more significant when she considers the gender disparity that still exists in sports photography. “According to the International Olympic Committee, there was a total of 774 press-accredited photographers from 50 countries at the Pyeongchang Olympics. Out of this, only 77 were female,” shares Annice. She was also the first and only Malaysia-based accredited female photographer at the event, a distinction she held with gratitude.

Being one of the few women sports photographers who cover figure skating, especially one from Southeast Asia, brought a rare kind of visibility that surprised even her. “One of the readers on my Instagram said: ‘I’m so glad to see your byline, because all my life I only see male photographers’ names, from Europe, Japan, or America.’ So I was like, wow. If I can be the representative, then I will fight for it.”

In a world of flashing lights, capturing the human moments.

Although capturing action shots came naturally to her, Annice is more interested in the intimate moments. “As an athlete pursuing winter sports in Malaysia, you often feel like nobody cares. But I care. I want to take photos that educate people: ‘oh, figure skating is like that!” So I started from behind the scenes. When they were warming up and tying their bootlaces, putting up on their makeup and costume…all the way until they stepped into the rink. Everybody always captures the limelight and success, but not what goes behind it.” It’s the moments of solitude amid flashing bulbs that she prized most. “After their name was called and before they took the position on the ice, each skater has a ritual to calm themselves. Those one or two seconds can determine how well their program will go.” She recalled having goosebumps while taking photos of figure skater Eunsoo Lim as she pressed her palms together and leaned her face forward in a prayer-like moment. “She passed by me, I took three frames, and that’s it.” For Annice, capturing these moments couldn’t be left to chance. “First and foremost, you have to get to know the athlete and the sport. Even if you assign me to football or hockey, I’d go to Youtube and do sufficient research.”

She cited her assignment to cover the Four Continents Championship in Seoul as an example. “I went a day early, took a walk around the stadium, and asked for the floor plan. As a photographer, every minute counts. You have to find a good position. I’d like to stand on the judges’ side, because the athletes always face this side of the rink. Then I need to figure out the toilet, where to grab snacks, and all the shortcuts to go in and out without missing a shot.”

Annice’s fascination with capturing the true essence of her subject stems from her belief that photography should be a two-way process. An act of listening as much as creating. She cites photographer Platon Antoniou as a role model. “To paraphrase what he said, when I’m going for a shoot, I want to learn from the person I’m shooting instead of saying, ‘do this, do that, just trust me.’ At the end of the day, everyone wants to be heard and understood.” For lion dance troupes, lunar new year is usually good for business — but not this year.

A local lion dance troupe performed under a flyover in Kuala Lumpur.

She carried this sense of responsibility into her photojournalistic assignments. In February, as shops shuttered and streets emptied over an eerily quiet lunar new year season, a contact introduced her to a lion dance troupe whose business had taken a hit. She went to the studio, a tiny space tucked under a flyover, and persuaded the troupe to let her shine a light on their performance. “As a photographer, you can’t just show up. You have to convince them that this is an important story to tell, and why you’re the right people to tell it.”

From initiating conversations with bus drivers who struggled to make ends meet during the pandemic, to unearthing the tales of Malaysia’s forgotten trades and craftsmen (in her exhibition series Faces of the Heartlands), Annice wants to challenge the norms of who gets to have their stories told. “Photography holds no boundary with regards to status, whether you’re someone high profile or someone nobody knows. It tells the same story.” Lim, a confectionary shopkeeper, with his ’kingdom’ of biscuit tins (Faces of the Heartlands)

It starts with two. Then it grows into a community.

Even as success came her way, Annice found herself wishing she had more “shutter sisters” to call her own. Having been verbally harassed and subjected to body-shaming comments as a young photographer, she knew all too well how disorienting the experience could be. “I didn’t have anyone to guide me. But if there’s a community to help, it won’t be that harsh I don’t want young photographers to go through what I had to.”

When she brought this up, a good friend connected her to another female photographer. “She said: ‘Oh, there’s this girl named Aisha Nazar.’ She showed me her Instagram. Instead of following the account, I slid into her DM and said: ‘Hey, I don’t usually do this but I’m a photographer as well, would you like to meet up?’ And for some reason she said yes!” They clicked immediately, spending hours on back-and-forth phone calls. Eventually, Annice proposed that they create an all-women photography collective together. “The lockdown has hit the photography community pretty hard, so why not do something? We found a core team and a few friends who agreed to do things together, even though we’re representing competing brands.”

Annice is excited to make the collective as inclusive as possible. “It’s open to individuals who identify as women, including non-binary individuals. It is also open to Malaysians who are abroad. Some messaged us and said: ‘Oh, it’s so nice to see this even though I’m in Australia!’ A few Malaysia-based expats came to us as well. So we’re like, ‘Okay, why not open this up to them as well?’

Today, this fledgling collective is known as Women Photographers Malaysia. From the spur-of-the-moment proposal that started everything, the collective has since grown and amassed nearly 2,000 followers, with its first anniversary fast approaching. Although she sees herself as a storyteller of other lives, perhaps the most meaningful story Annice has uncovered is her own. It’s the makeshift family of photographers she found and the invisible stories she revealed. “As a sports photographer, I want to go to the Tokyo and Beijing Olympics, but along the way, I feel like I have found something bigger than myself.”

Want to check out Annice’s work and future projects? Visit her PIXERF profile or follow her on Instagram (@annicelyn).

This article is part of Women in Focus, a series of articles that shine a light on the power and resilience of Asia’s female creators who #ChoosetoChallenge. Every month, we’ll publish a story on these amazing individuals — from photographers to visual artists and filmmakers.

The Writing’s on the Wall: Asia’s colourful street art and graffiti scene