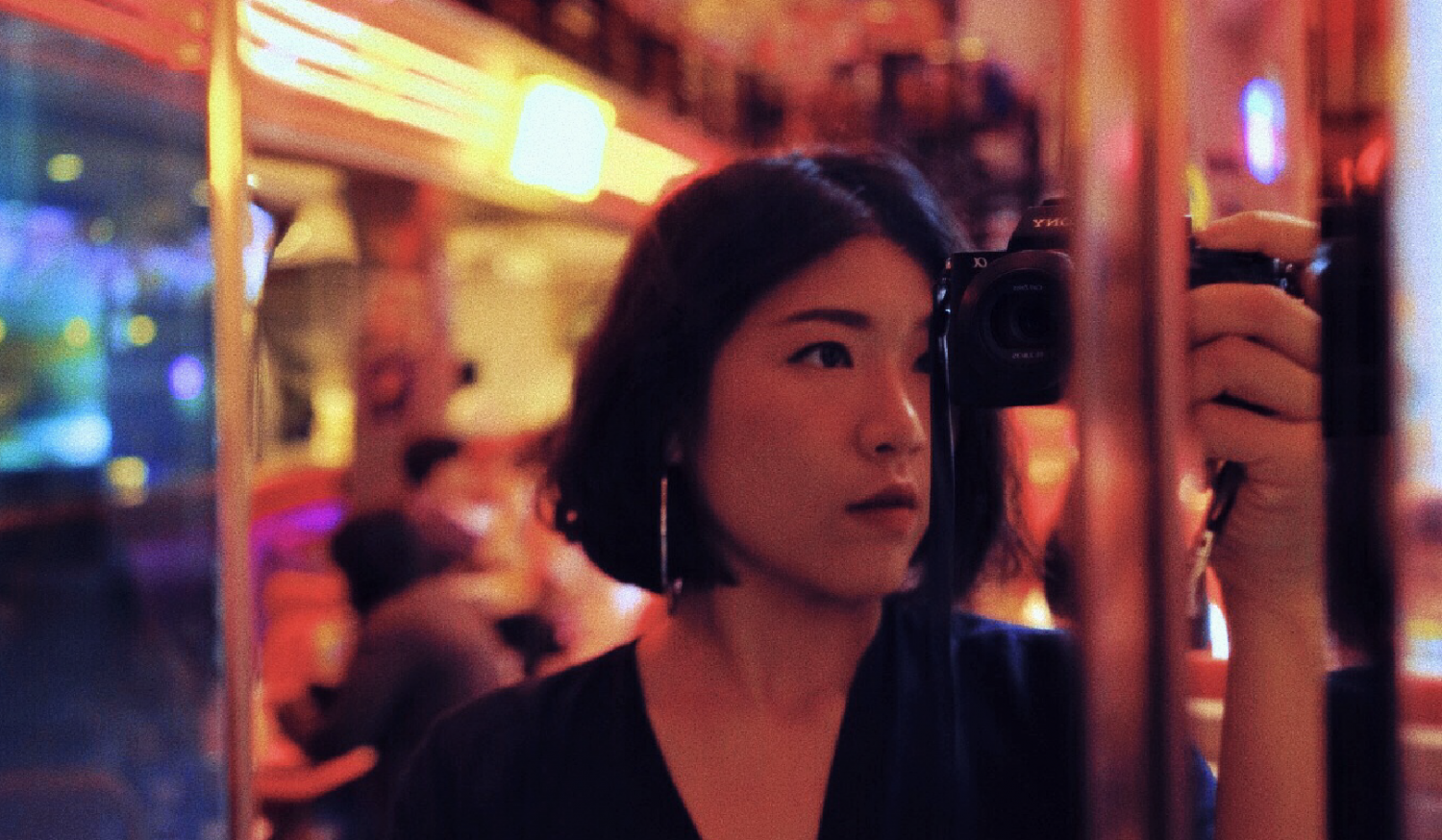 Lost and Found: How Rumpaporn Vorasiha Rediscovered Her Story — and Her Purpose

Lost and Found: How Rumpaporn Vorasiha Rediscovered Her Story — and Her Purpose

Stuck in a rut after finishing her studies at a local university, Rumpaporn “Pear” Vorasiha took to New York to learn about photography. But she discovered a lot more – including her calling in life. Now she’s helping young photographers in Thailand to grow into their potential. A chance encounter. And a leap of faith.

Pear was only sixteen when she found photography.

It started with a chance encounter during Science Week in high school. “We were all gathered in the school hall and one photographer came in and volunteered to teach us. I didn’t want to sit in the hall, so I raised my hand. He taught us how to stand and hold the camera.”

At the back of the photographer’s T-shirt was a website address that caught her eye. “Back then there was no social media. Only web boards for people to post their pictures and comments.” She took note of the address, went back home and Googled it. It belonged to a photography group.

She marvelled at the images she found there (“It was like save, save, save!”). Then she joined the group and started going on photography trips. At school, she took pictures of her classmates to practice. When she lost her camera in a cab after a trip, her father bought a new one – a 300D Canon. Pear resolved to make the most of it. “I produced lots and lots of pictures.” Pear’s early photos were of her high school classmates. Now she has shot for brands and her work has been showcased internationally.

Soon, her fascination blossomed into a plan. She wanted to master the craft and become a great photographer. But her options were limited. After finishing high school, she enrolled in Bangkok University, but the school had yet to offer a photography major. Undaunted, she immersed herself in the Film program, hoping to learn about photography along the way. However, the curriculum left her feeling shortchanged. While it catered to future filmmakers and those hoping to take on various film industry roles, it wasn’t the right fit for a student who wanted to focus on photography. She tried to fill the gap in her photography training with various online resources, but it wasn’t enough.

“When I graduated, my skill in photography was not up to standard at all. So I wanted to start over.”

She took a leap with a ticket in hand, out of the comfort she knew, into the great unknown called New York, where she set out to study at the International Center of Photography. Dark, electric mood saturates one of Pear’s shots from her New York days.

A rocky start. Then a stunning revelation.

The first three months were a rocky ride. Back in Bangkok, she lived in a spacious house bathed by sunlight and warmth. She had friends, family, and acquaintances to call anytime. Living in New York was a lesson in developing inner grit. She found herself in a bare shoebox apartment, alone for the first time. “When I went there, the room is the size of my bathroom,” she laughs. “No kitchen, just a bathroom and bedroom, and that’s it. No closet, even. I was like, what am I doing here?”

For the first three months, alone and overwhelmed, she cried every night, wondering if she made the right move.

Gradually, things improved. The acquaintance of a family friend took her around the city to shop. Once the class resumed, she made new friends and found herself immersed in fresh discoveries.

“It’s a full course and I was a full-time student, so I went to class every day. No time to be alone and cry.”

But the most eye-opening experience was yet to come. A pro at lighting, Pear’s photos are a study of light, mood and composition.

“Before New York, I thought a good picture meant good lighting, good composition, good colours. Very precise,” Pear admits. But one exchange revealed just how much she has to learn.

One day, the students were asked to present a set of photos that spoke for their work. These photos would determine which seminar teacher they would be matched with. Pear brought her entire portfolio, but the response floored her.

The head of the school examined the photos, looked at her and said, “You’re very good at lighting. What else do you have?”

“At the time, I didn’t know what a concept was, what a project meant,” Pear admits. “I only know – oh, I want to take a portrait of this girl. Okay, I’ll take ten pictures of her. She’s in the same place, wearing different dresses. And I count them as one project. So I was like – what else do I have to have? Is this not enough?” A photoshoot project in New York. Pear’s time in the city challenged her to think about photography on a deeper level.

She left the room in a daze, her mind racing. Outside, she stumbled into a friend. “I was like, can I see your portfolio? He showed me his projects.”

The project that seized her attention was called The Reaching Line. “He’s been photographing walls around the city. Below the line where it’s reachable there’s everything — bills and posters and graffiti stuck on the wall. But up there, above the line, there is nothing (but the sky). He took these pictures in every city he travelled to. That’s when I realised. Ohhh, this is conceptual work. And I never thought about that before. Because in my country or Facebook feed, I never encountered this kind of work.”

This revelation defined the biggest hurdle she faced in her first year in New York. “My mind has never been trained to tell conceptual stories. So it was a struggle for me because it’s like…what should I tell? What process should I match with the work? It’s kind of experimental for me.”

Soon after returning from New York, while reeling from a personal heartbreak, an idea sprouted in the back of her mind and took hold. She imagined a project that examines the way women would put their bodies and looks to painful scrutiny. This insecurity was familiar to her. “It’s very common when we see relatives or friends we haven’t seen in a while, that the first thing they say is: ‘How have you been doing? Have you gained weight? What happened to you?’ She recalled being compared to a “prettier” relative as a chubby child, and how the hurt lingered. “The first rule for me is that the sitters (models) have to be women whom I admire and find “perfect” in a way. I wanted to raise a question to them: if you see yourself like this, but I see you as perfect, would it change how you feel about yourself?”

Given the intimacy of the subject matter, she knew she had to convince her models to take part in the project. She took a few photos using her own body and shared the resulting shots to explain the project and gain their trust. “When I entered their house or room, it was their environment, so they felt safer. We would talk for hours before I took the pictures.” FLAWLESS is a new frontier for Pear, allowing her to dig deep into an intimate and emotionally charged subject matter. Gaining the trust of her models means revealing her own vulnerabilities. “Somehow, people find it easy to trust me.”

The project proved transformative. It gave her the confidence to craft a conceptual project and even changed how some of her models saw themselves. She received words of gratitude from a woman who had struggled with a scar. “She always thought that this is the thing she doesn’t like about herself. But after seeing the picture…she saw it in a different light. She saw the scar as part of her story.”

The project, titled FLAWLESS, made it to the Unknown Asia Art Exchange in Osaka, an international showcase for budding photographers in the region, and won the Judge Award. “The judge that gave me the prize is the owner of WONDER FOTO, a photo festival in Taiwan. He invited me to exhibit this work in Taipei.” During Pear’s days at Bangkok University, the school had yet to offer a photography major. Now it does.

Back to where she started, with a new purpose

While her journey as a photographer continues, Pear’s path has also come full circle. In 2013, after coming home, she accepted the offer to become a Special Instructor from her alma mater. Six years into her tenure, her school finally introduced its first photography major. She was tapped to provide her input on what the students should be learning.

More than a side gig, Pear saw this as a chance to pave the path for other budding photographers in Thailand, giving them the skill to become top talents who can stand up to the world’s best. “In the past, I was angry because in Thai education nobody really cares about the students. That was my experience in college. I cannot remember any subject I learned, only the memories of studying with my friends. So I want to build a new era in terms of how universities should educate a new generation of photographers. Well, I’ve been trying for eight years,” she says with a laugh.

From a young talent lost in an education system that couldn’t quite support her need, she has now returned to help the dreamers who came after her to find their path. It’s an uphill battle. But she’s up to the challenge. Pear’s journey came full circle at Bangkok University, where she now teaches the next generation of photographers from her home country.

This article is part of Women in Focus, a series of articles that shine a light on the power and resilience of Asia’s female creators who #ChoosetoChallenge. Every month, we’ll publish a story on these amazing individuals — from photographers to visual artists and filmmakers.