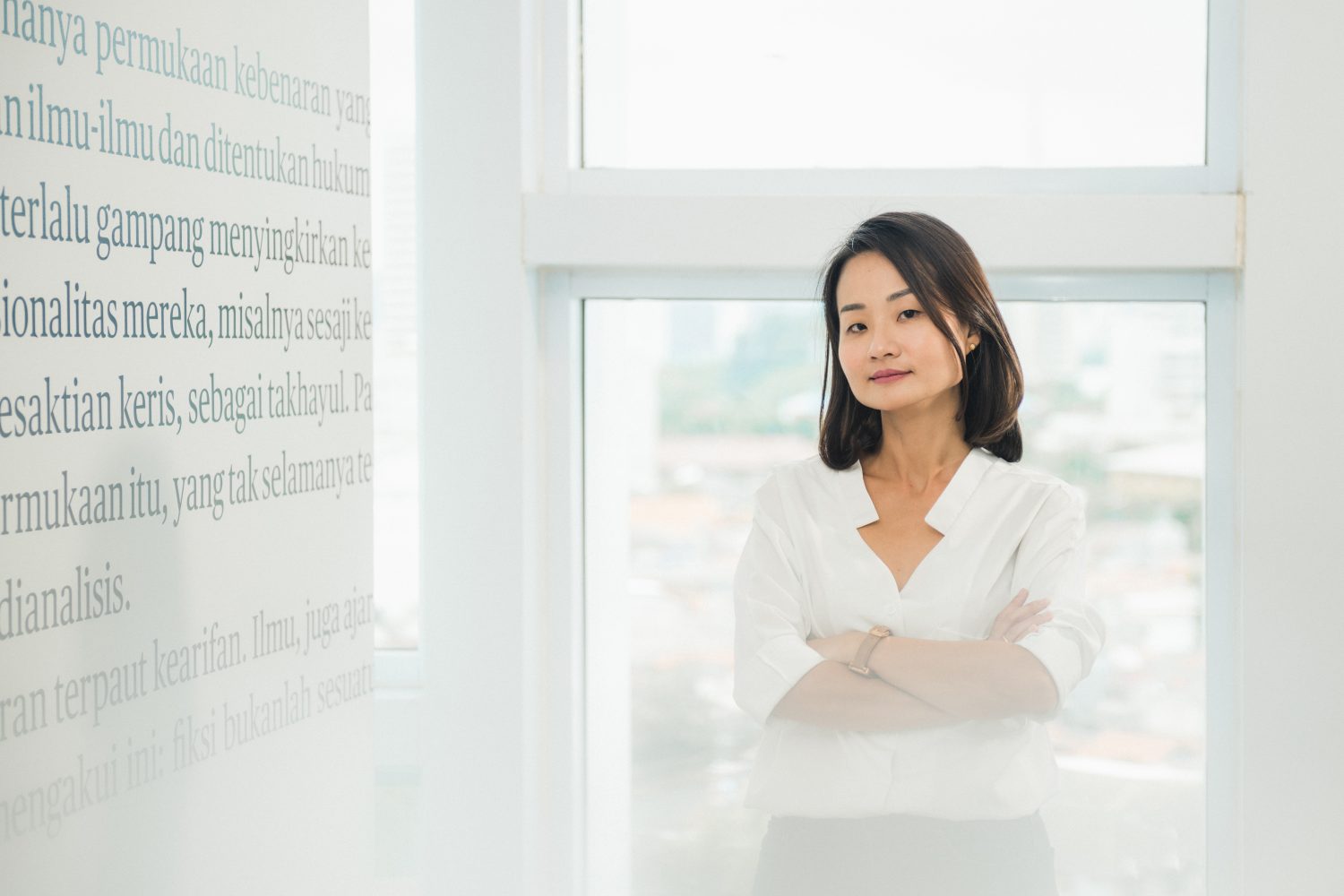 The Road Less Travelled: A Conversation with Faye Alund

The Road Less Travelled: A Conversation with Faye Alund

Faye Alund’s desire to make an impact has taken her to unexpected places – from conflict-stricken areas around the globe to her rising entrepreneurial home country. This is her story.

It all started with an idea

Despite being one of the world’s most populous countries with a large youth population, Indonesia is not largely known as an entrepreneurial hub.

Faye Alund wanted to change this.

“I am curious why we couldn’t be a first-world country just yet. What can we do to change this in the next five, ten, or twenty years? It has to be through economic development driven by entrepreneurship.”

In 2008, she found an intriguing solution in a business model that had been slowly gaining ground in the West: coworking. Back then, the concept hadn’t yet taken off in Indonesia. This sparked discussions between Faye and her husband, Dennis.

“We thought it would be cool if there was a space where we could bring people from different backgrounds together, so they don’t have to spend years building networks of who’s who in the industry,” she explains. Despite their enthusiasm to turn this idea into something concrete, the couple were too busy to give it a second thought – until the right moment came six years later.

The NGO she had been working with had just closed its office in Bali, leaving her at a crossroad. “Should I apply for new jobs for the sake of it,” she recalls musing, “or is this the time to realise that concept, that dream of mine?”

She made the leap and founded Kumpul Coworking Space. She hasn’t looked back since. Bucking traditions and defining her own path

The journey that led Faye to her current role as an entrepreneur also began with two diverging paths – a comfortable life with financial security, or a less travelled route that her heart believed in. When a job offer from a big company in Jakarta came knocking during her final year in university, she followed her guts and passed on the offer. Three months later, a chance to make a difference found her moving from the city where she grew up to an Indonesian province marred by frequent bombings. Eventually, her job as a trauma counsellor would take her to Pakistan, Zimbabwe and Yemen to help survivors of war and violence recover from harrowing ordeals.

This intense chapter of her life seems a world removed from the start-up environment she inhabits today, but the two sides of a coin were connected by a single thread: her belief in active citizenship.

“You can do whatever you want to do, with whatever skills, as long as you’re doing impactful work. I’ll choose a job when I know it’ll have an impact on the lives of others.” She credits this can-do, altruistic spirit to her mother. “Since I was three, I remember going with my mother to her workplace. She worked as a counsellor at an orphanage for troubled teenage girls. The pay was only enough to cover her transport. Every school holiday, there would be kids who couldn’t go home, and my mother would bring them home to stay with us.”

“The vision for Kumpul was always about creating economic impact. I want to see my country become better so I ask myself: How can our work impact the community and the nation? We chose to do it by supporting the entrepreneurship ecosystem.” Creating Kumpul was just the beginning of her quest to shake up the local entrepreneurship scene. As one of the early advocates of coworking in her country, Faye wanted to encourage more Indonesians to adopt the concept and run with it as far as possible. But it wasn’t something she could do on her own. That was why, in early 2016, she teamed up with her fellow entrepreneurs to set up Coworking Indonesia, a national coworking collective where she now serves as President. The role puts a huge responsibility on her shoulders, but she doesn’t mind it.

“I believe being in a leadership position does not mean you know best or that you’re the strongest. It means you want to do the work to translate the vision.”

The first year at Kumpul Coworking Space was a test on her resilience. “We started the business with a very small capital. Everybody said it was impossible to do what we wanted to do with the money we had. We made some beginner’s mistakes, but we learnt from them.”

Eventually, they proved the naysayers wrong. And five years later, she begins to realise just what it is that sets the company apart in the crowded coworking landscape.

“Our strength lies in content and programming. We are very good at executing programmes and bringing in valuable and impactful partnerships into the ecosystem in certain cities. We thought this is normal, but it does not come easy to some other coworking spaces.”

With this insight, comes a new strategy. “We started calling ourselves an education and growth platform for entrepreneurs and start-up founders. We help them to thrive through curated programmes that we can execute through our coworking spaces or those of our partners’.”

Finding her stride as an entrepreneur

As our conversation turns to a woman’s place in the world today, Faye reflects on her upbringing with gratitude.

“My parents always told me I could be whatever I wanted to be. I’m just Faye, with my skills, my dreams, and my personality. I can be a boy or a girl. In my mind, it doesn’t make a difference.”

This mindset has helped her navigate the men-dominated start-up environment without feeling outnumbered. “I’m the only woman on my company’s board and the only woman shareholder. But someone else had to point it out to me at the beginning.” Faye admits to feeling lucky to have grown up without experiencing the impact of gender inequality on a personal level. Still, she has no illusion about the difficult realities facing many women around the world, from domestic spheres to the boardrooms. “Now I pay more attention to these issues. Just because I didn’t experience it, doesn’t mean that inequalities do not exist.”

Of course, there were small exchanges that gave her pause. “When people see me in a professional context, they always ask me things like ‘who is taking care of the kids?’ or ‘how do you juggle work, kids and family life?’. The problem here is that no one asks the same set of questions to my husband. Even though he is equally juggling his time.” Still, she considers these challenges minor bumps compared to the biggest hurdle faced by many women entrepreneurs out there.

“The toughest challenge is to make women believe that they can do it, and to find a partner who believes they can do it. If you cannot find this support in your partner, spouse or family, you need to seek out your own relevant support system out there.” “That is why coworking spaces or programmes related to entrepreneurship are very important. You will find yourself surrounded by people who are doing the same thing and you won’t feel like the odd one out.”

Faye argues that empowering women is not only a matter of principle – it’s the most logical way to fuelling her country’s economy.

“Only 9.1% of Indonesia’s GDP is contributed by women,” she points out. “What happens if more women can grow their business and contribute more? We could double or even triple our GDP.”

We say: It’s a persuasive argument.

Defining the image of a successful Asian woman

As a start-up founder, Faye often takes to social media to engage her audience. She admits, however, that finding the right image often proves difficult due to the lack of diversity in stock images of Asians, especially Southeast Asian faces. “This is a problem as our vision is to engage the community. So we usually have to shoot the photos ourselves.”

She has suggestions for photographers who would like to portray modern working women in all their complexity.

“Capture women in all kinds of scenarios. Women in business don’t have to wear suits. We are in an era where you can be a portrait of success in your jeans and T-shirt. Successful businesswomen also come in all races, including underrepresented minorities.” “They don’t have to be in a city or urban environment either – you can be just as successful owning hectares of farmland, for example.”

As Faye puts it, there’s more than one way to be a successful woman. She can be fiercely ambitious and empathetic. A mother and a fearless changemaker. An altruistic idealist and an inspiring business leader. She can make mistakes, take risks, and follow where her heart takes her, even if it means drawing her own map to get there. The only thing that matters? She’s got to make an impact.

And she’s doing it every day.

Previous Article
What's in your camera bag?
Next Article
Getting serious about Asian food

Arlene Rieneke
Arlene Rieneke is the Senior Copywriter at SiliconPlus Communications. She delights in telling real and imagined stories – be it about a brand, a product, a company, or a slice of history. She enjoys puns, cinnamon buns, and everything fun.

Keeping things #SuperCanggih in KL with our Definers. Our official launch in Malaysia is here.