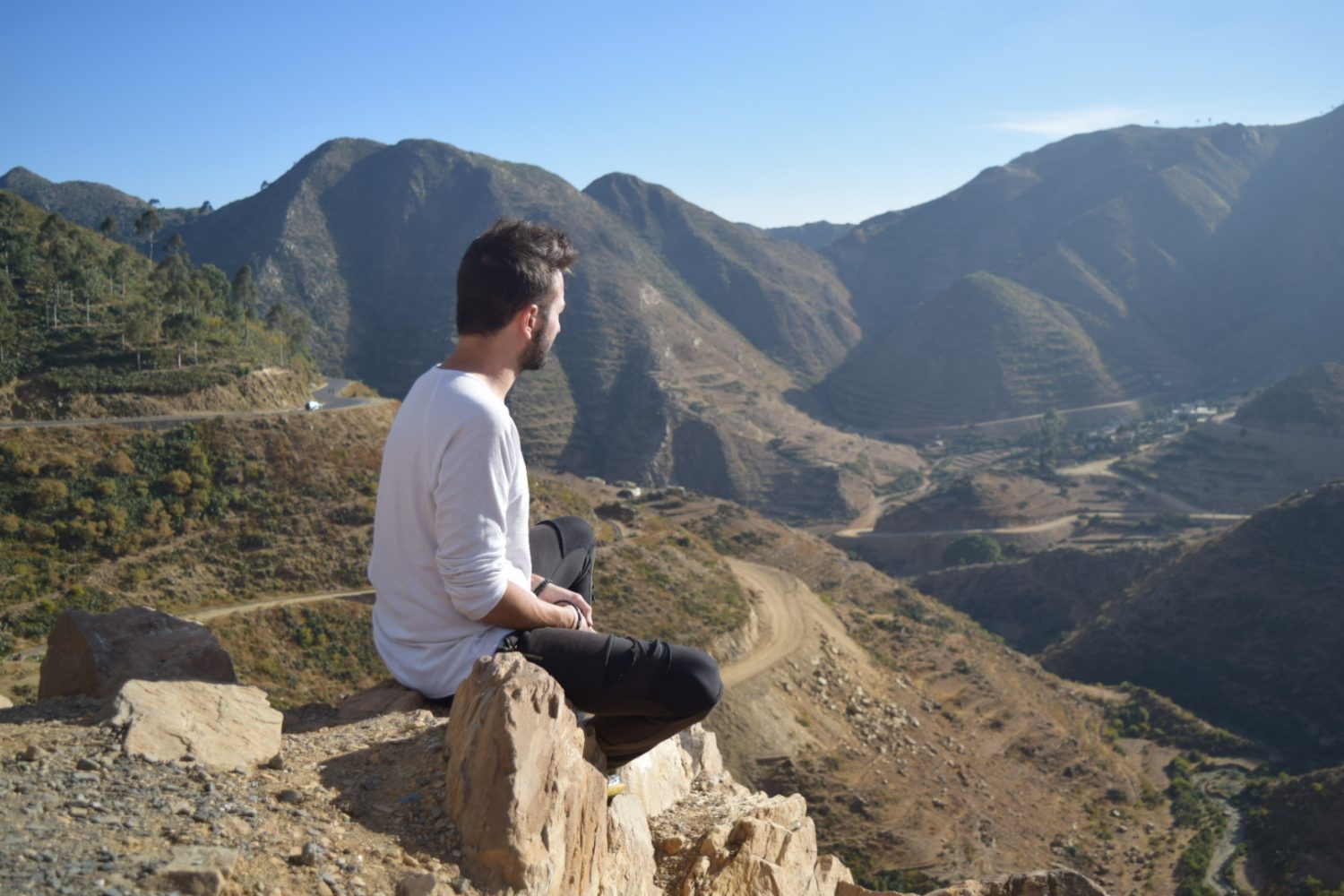 The man who made the world his oyster

The man who made the world his oyster

Having met Sal Lavallo last year on the judging panel for Asian Geographic’s Images of Asia photo competition, we were intrigued by his unique story: he had left a corporate job to become one of the youngest persons to have visited every country in the world, including – most recently and surprisingly – Yemen. Having amassed a following of over 40,000 on Instagram and defining himself as “not a photographer, but someone who goes to pretty places to take pretty pictures”, we wanted to find out how Sal started on his journey, carved out a niche identity within a very cluttered social sphere, and where he found the courage to wade into places like Kabul, South Sudan . . . and did we mention Yemen? The first question I want to ask is . . . Why did you want to go to Yemen?

Sal: Well, i had to visit every country in the world, right? If you read my story online, I wasn’t able to visit the historical sites in Yemen, but what we saw was beautiful nonetheless. The situation there is unfortunate though; we mostly kept to the east side of the country, driving for 20 hours in Emirati-controlled land.

I was there in 2004, where it was a little more peaceful. Yemen must have presented a huge culture shock if you have lived in a city all your life.

Sal: Yes, Yemen is definitely nothing like Singapore. We had some hairy moments there and to be honest, I don’t consider myself an adventurer; I tend to stay on the safe side. Unfortunately, I was misled there by my guide, who simply wanted more money at the expense of my safety.

In your story, you mentioned meeting three hunters in Yemen who helped you return to your hotel in Oman.

Sal: (Laughs) Yeah, people tend to forget that life goes on for others, even in war zones. I’ve been in nightclubs in South Sudan and boat-riding in Kabul. People are often shocked that that I don’t just stay indoors all the time. Doing research, I’ve found some interesting things about you – such as owning a small farm in Tanzania?

Sal: (Laughs) I used to run an NGO called “Trail of Seeds” in Tanzania, and I wanted to take on responsibilities that would keep me coming back. I bought the farm because I thought it was more impactful. I take no profits from it though, and all the produce goes to the people.

I also came across the village of Mang’ula in Tanzania where you converted to Islam. Can you share about your experience there?

Sal: I converted to Islam in a small mosque in the village, with a single candle – truly a picturesque moment. I was brought up a Catholic, but at the same time, I also learnt to be inquisitive and to disagree or question when I felt it was necessary. For the longest time, I was exposed to many religions and embraced spirituality. Lady in traditional hijab in Pakistan

What happened in Tanzania was that I would go to the mosque on Fridays and to Church on Sundays, and the village elder would ask me what I believed in. Apparently, my response matched the five tenets of Islam, and the rest is history.

How did that change affect your outlook as a world traveller?

Sal: Travel is really important in Islam – it’s mentioned 27 times in the Quran. We are told to see God’s wonders. Also, Islam has a very hospitable culture. Going to all those countries and being welcomed as a brother was a really nice experience for me. Speaking of travelling, you have successfully defined yourself on your chosen medium (Instagram). It seems that you have quite a unique approach to how you use photography to tell meaningful stories about your travels.

Sal: I think what you are trying to say with your photo is important. What do you want your audience to understand? I prefer to make them think. Instagram is pretty cool because you can use captions to tell a story.

I want to talk about your post when you were in Morocco – about white privilege.

Sal: People often see me (correctly) as a young white man travelling the world, and there aren’t many people in this era admitting to or being honest about it. I wanted to shed light on the people who don’t have this privilege.

Travelling is a privilege but travelling also reveals to you the have’s and have not’s of other people.

What sets you apart, we think, is that you take the time to share these thoughts and stories. It’s not just a collection of pretty pictures, but ones that also provoke thought. Being able to do what you do in areas like South Sudan is both thought-provoking and inspirational. It also sheds light on the polarity of such places, displayed both by your images and the descriptions. The highlands of Iraq

Sal: South Sudan is actually a bit safer now. There have been a few peace agreements signed lately and they are more accepting of Sudan. I spoke to the consulate in Kenya and had to convince them I was not a reporter in order for them to release me.

Kurdistan was amazing but I was a bit nervous as the Mosul offensive had just started a week before I landed. But it was such a diverse and beautiful place that I ended up extending my stay. I had the most wonderful guide. There are Christian, Muslim, Jewish sites – it was so diverse and it really makes you think. I’m just thinking, typically Airbnb or couchsurfing wouldn’t exist in some of these places . . .

Sal: I went to an international school and was lucky to make friends and connections – that allowed me to stay in over 70 countries with friends.

I want to talk about some of the stories behind the images you’ve sent us. How about North Korea for a start? Sal: I bonded with my guides over topics such as family, girls, and sports. Our chats made me realise how similar we are as people. We were also lost on a 3-hour road trip and for a long while we had no idea where we were, pulling up in small villages to find our bearings. I think I was able to see genuine life in a place shrouded in so much mystery.

Let’s swing to Timor Leste, the island with no tourists. What was it like? Sal: I was lucky because I was able to connect with a former student in high school. There are so few people in Timor Leste that it feels so solitary, yet beautiful, especially with all its history. That is a photo of a very good friend of mine, one of the few shots I take of people.

How about the only country with a Gross National Happiness Index, Bhutan? Sal: I ended going as an invited guest of a friend, so I did not have to pay the daily tax. It can’t be a random person you meet – we needed to prove that we went to school together. This is a picture of me sitting in the Le Meridian. People are often surprised that luxury – expensive luxury – is available in a place like Bhutan.

What were you doing next to a volcano in Turkmenistan? Gates of Hell in Turkmenistan

Sal: That’s the Darvasa gas crater, also known as the Gates of Hell. It was a gas rig that broke and when they decided to let the reserves burn off, what they thought would extinguish in a few weeks kept burning for 50 years and counting. It’s quite scary actually.

And what’s the story behind the photo of you sitting on a tank in Iraq with sandals on? A tank in Iraq

Sal: Images like these help us to discuss the history of the place. Ideally, such images should not exist. I went to a museum in Iraq and saw art made from bombs and guns; it was interesting to see how they transformed violence into beauty. What was more interesting was the quote accompanying these art pieces.

These guns were neither made for us nor did we want to use them.

All these countries, all these photos, all these stories – how have they defined you as a person?

Sal: How have I changed from when I was 16 till now? It’s a tough question to answer. I think I now understand the world in a holistic way – how different lives are lived all over the world, and how similar people actually are.

There is no one I cannot relate to, having visited every country in the world. There’s that connection I have and I have learned to focus on similarities and not the differences.

Have your experiences defined your photography? A Mosque in Pakistan

Sal: It’s really nice to go through a country and think about how to capture its beauty. Choosing what images to put up to convey a meaning or story is also important to me. I am thinking more about the audience and how I can provoke thought.

You tend to stay away from portraits (of other people) and focus more on landscapes. Is that a conscious choice? Sal: I feel it’s a very personal thing when someone shares their image or story with me. It’s a very private connection that I feel protective about. When I ask someone to pose for a photo, there is a difference between them knowing it’s just for me, and if it’s meant for thousands of people to see.

What do you say to people who want to do what you do?

Sal: The first question I ask is “why”? I studied economic strategy so I was keen in exploring themes related to what I’ve learnt. I love praying in every Muslim country and that was what I wanted to do. Travel the way you want to, but don’t do it for no reason because you won’t get anything out of it. Back home in UAE

*** We will be releasing the full podcast with Sal Lavallo on PIXERF Talks soon! Stay tuned and check back on XERFIE for the release.

9 photography trends to keep you inspired in 2018