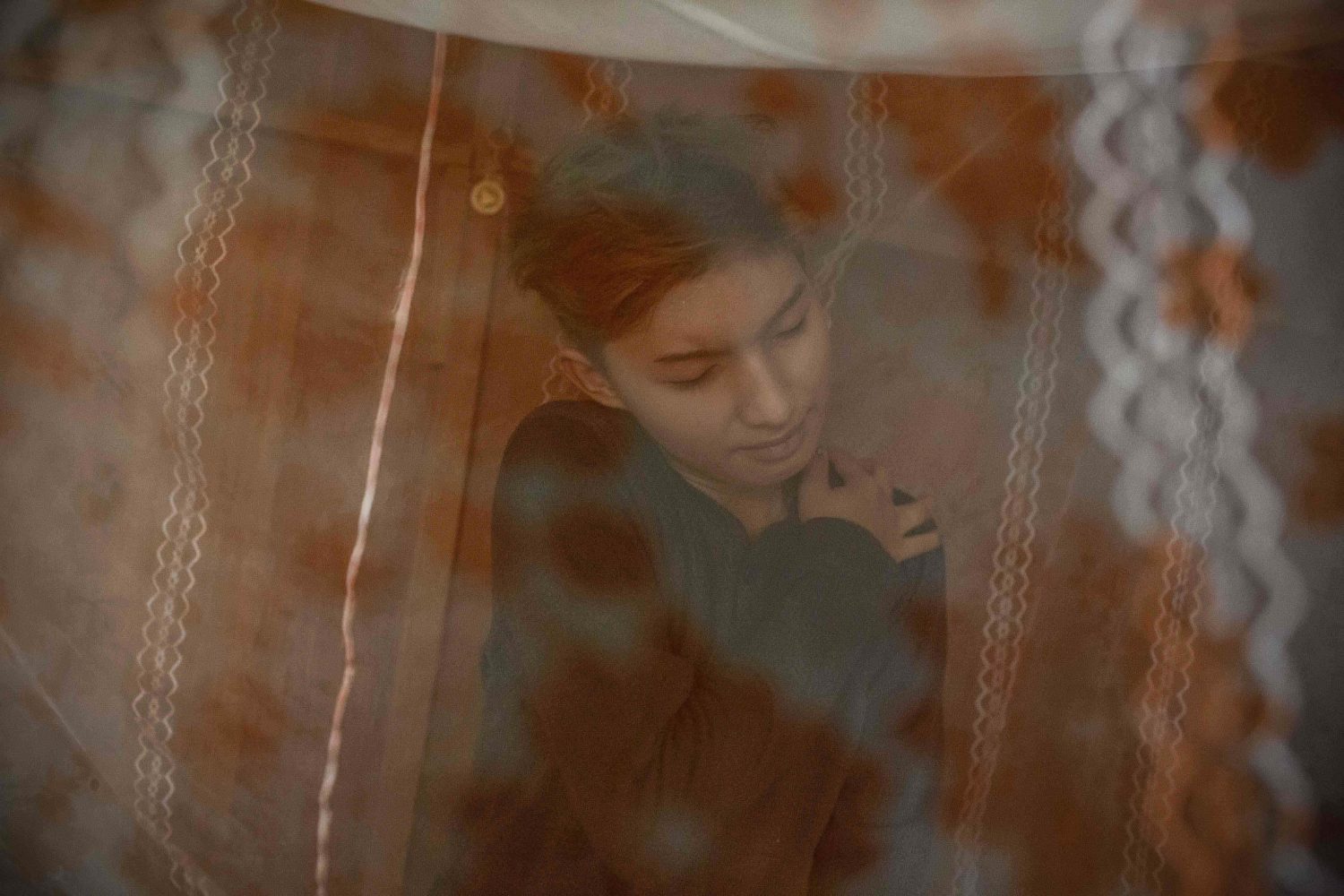 She’s been a student, researcher, volunteer, documentary photographer and filmmaker. But they call her the human geographer. The storyteller who maps what it means to be human. This is the story of Grace Baey. It always begins with a conversation
When photographer Grace Baey staged her solo exhibition (Un)bound, a photodocumentary work illuminating the stories of Singapore’s transgender community, she left a guestbook at the venue. “Guestbooks are often a hit or miss, but I was really heartened to see many lengthy comments about the work. Some even took the time to draw illustrations.”

Yet her attention was drawn to something more meaningful. “There were a few comments from conservative folks who expressed their reservations about LGBTQ+ identity. For example, one person wrote, ‘no one can go against the flow of nature’ and signed off with his name. But it was heartening to see others responding to his comment and speaking with one another to encourage understanding and respect for diversity and an individual’s gender identity.”

Encouraging these conversations has always been her goal. And it goes beyond one project. The art of two-way communication is inseparable from Grace’s work. Often, it happens outside the frame. A portrait of Chris in her bedroom, from “Living Choices”, an ongoing project about the lives of trans men and women living in Myanmar.

“When I first meet with individuals whose stories I’m interested to photograph, I always have a proper conversation prior to taking out my camera.”

She would explain the aims and intentions of the project, how she hopes to approach the story, what the expected timeline is like, and where the photos will be shown. And she is equally keen to listen. “I would ask for feedback on how they would like to tell their stories and any concerns they might have.”

Letting her subject retain a sense of control over their story is important to Grace. A novelist has the right to craft a work of fiction to their own whims, shaping characters and revealing plot turns like mouldable clay. But working with real people is a different story. Some details might be too sensitive or personal to be told. Certain discoveries could put someone’s careers or relationships at risk.

“Wherever possible, I try to address the power imbalance between the photographer and the person being photographed. As much as I hold the camera in my hands and choose when to press the shutter, I also communicate that they can be active participants by deciding what to show or omit in my presence.” Before photography, a life spent in research

Prior to working as an independent photographer, Grace poured her attention to studying migration and development issues. “I did research and communications work at the Asia Research Institute, focusing on low-wage migrant workers in Singapore. It was through my role that I saw the potential of photography and film in terms of engaging a wider audience to communicate important social issues.”

Grace’s interest in this topic was piqued during the 2008 housing crisis, when an increased inflow of migrant workers hired to support the accelerating pace of construction projects in Singapore sparked a groundswell of resentment. A proposal to convert an unused school building into temporary housing stoked public uproar. “I remember reading various comments that revealed certain negative stereotypes and racial prejudices against South Asian migrant workers. I was pretty ignorant about migrant worker issues, especially on a structural level, and decided to spend time educating myself.”

Grace devoted her postgraduate thesis to the topic and continued her research for another five or six years, during which she produced a couple of documentary shorts. One followed an Indonesian migrant worker who set up a community library in her village, while another told the story of Bangladeshi workers returning home after toiling in Singapore’s construction industry. Before picking up her camera, she also took the time to volunteer with various Singapore-based NGOs who advocate for migrant workers. After working in Singapore as a construction worker for seven years, Samad Dewan returned to his hometown in Shamshabad, Bangladesh to reunite with his family.

This in-depth, hands-on approach to understanding issues beyond the headlines continues to define her approach to photography. “I do my own research on what’s been done before and think about how the project can respond and add value to what’s out there. There’s a lot of pre-production work. I find that the actual shooting often takes up no more than 20 percent of the process.” Srey Noun and Srey Pov, residents at Action Cambodge Handicap in Cambodia, preparing pineapples for making jam to be sold at the market as a source of income.

An encounter with a stranger evolved into meaningful friendships

It was Grace’s work on behalf of migrant workers that led to a fateful meeting. While conducting research on labour and recruitment matters within the Bangladeshi migrant community in Little India, she met and befriended a woman named Sonia. “She was then the organiser of an annual beauty pageant for trans women in Singapore, and she was looking for a photographer to assist her.”

Interacting with Sonia and meeting different folks from the community opened Grace’s eyes to the prejudice and misunderstandings they had to face. “It is common for people outside the LGBTQ+ community to assume that being transgender or gay is somehow a “lifestyle choice”. From many trans individuals I know, transitioning isn’t much a choice as an inevitability, and most individuals pay tremendous costs – be it physical, emotional, social or financial – to be who they are.” The Un(bound) exhibition is a collaboration between Grace and the trans community whose stories she told.

This sparked a series of collaborations and deep friendships. Grace photographed the annual pageants and assisted with the planning, taking the time to get to know the community better. In 2017, on a trip to Yangon, she spent a month documenting the lives of transgender individuals in Yangon. Gradually, an emerging theme came into focus: family and relationships.

Later, she carried these themes into (Un)bound. While projects focusing on the LGBTQ+ community frequently focus on dramatic or harrowing angles, Grace weaves an intimate series of portraits into lives almost as ordinary as any other, peppered with everyday resilience and coping strategies. It wasn’t her handiwork alone. The project represented a bold step forward in approach as she brought the individuals she featured right into her creative process. While the photos she took served as a starting point, it was their hands that cut, pasted and put together the stories featured in the scrapbooks. They were co-authors of their stories.

“It takes great courage to put your story out there. So I try to put myself in the person’s shoes, seeking to understand the larger picture of why someone would take these risks and then use some of these insights to inform how I approach the story. Photography gives you the opportunity to witness very vulnerable moments in people’s lives. You don’t ever want to take any of that for granted.” Grace’s work offered her a window into moments of joy and vulnerability. Depicted, a jubilant scene during the Singapore General Election vote count (2020).

From photographs to short films, telling stories with a human heart

Over time, Grace’s desire to tell human stories branched out from one medium to another. “I can’t really say which I prefer between photography or filmmaking as every story is different, and it’s typically the story that dictates the medium. But I feel that some stories are more powerfully told through film.”

As director of photography for the short film Sugee Cake, she helped tell the story of a Eurasian family coping with the loss of the family patriarch. In the Filial Son of Bukit Merah, a short film she directed, her camera followed a man who helped elderly residents fulfil their last rites, often paying for funeral arrangements out of his own pocket.

While most of the film projects she undertook were commissioned by clients rather than self-started, her work gravitated toward familiar themes: birth and death, grief and love, family and friendships. Universal human experience found in almost every home. Perhaps it was the community she has woven over the course of her career. Or simply where her heart keeps tugging her, like a compass pointing north.

Still, she’s not afraid to get explore thornier, darker issues. “More recently, I had the opportunity to work on ‘The Invisible Contract’, a narrative short film about human trafficking in Singapore’s entertainment industry. Having prior knowledge of these issues, especially on a structural level, was valuable in terms of helping me be more intentional and critical in the crafting of the film.”

A quiet challenge, expressed through her work

Grace’s story brings to mind an epiphany. Art is commonly seen as an expression of individual brilliance. Yet great works of art are often the result of collaboration that happens only when a person cares to step outside their comfort zone to interact with a stranger. This is true to Grace’s work and the way they are largely shaped by her effort to understand the misunderstood. To allow everyone to be seen at their most human, relatable and vulnerable. It’s made possible by her willingness to step aside, even to recede into the background, to give her collaborator a chance to reclaim their story. Community is central to Grace’s work and defines how she approaches her projects – by listening and inviting people into her process as co-collaborators.

“I’ve always hoped that the work I do would help encourage empathy and respect for people and communities, especially those who may not be within our immediate social circles,” Grace says.

In a world where the pressure to be the loudest voice is overwhelming, and where listening is a lost art, her philosophy might be the ultimate challenge to creators everywhere. We say: challenge accepted.

Want to read more about creators like Grace? For our Women in Focus series, we will profile a different female creator every month – photographers, artists or even filmmakers – who challenge the world before them with courage and style. Stay tuned to this space for more stories every month.